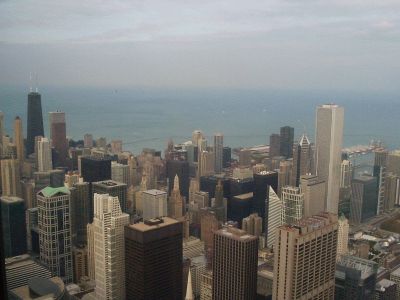 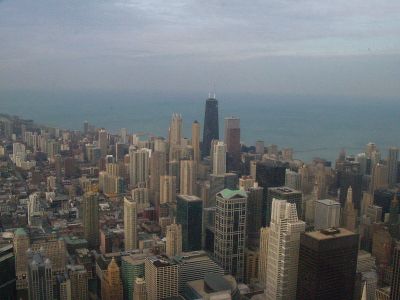 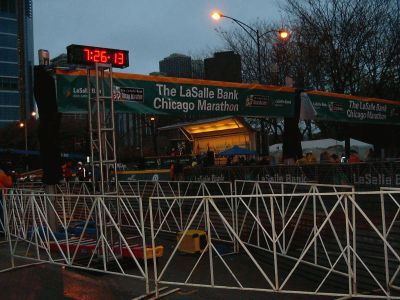 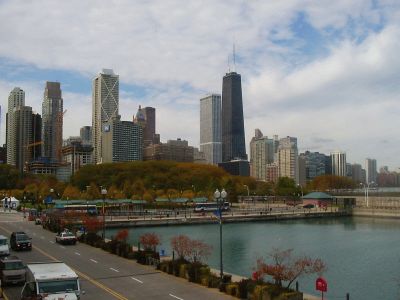 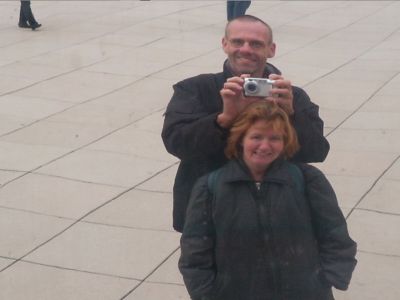 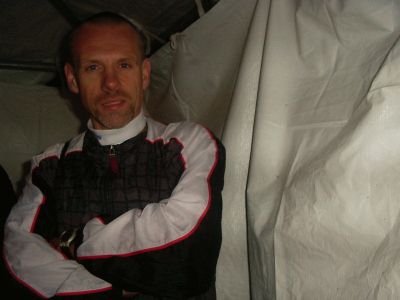 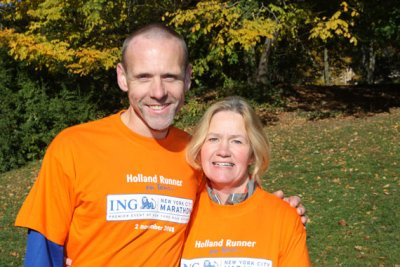 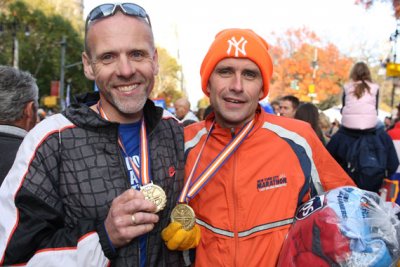 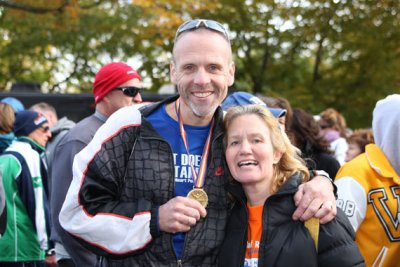 Subway on the Bronx (Boston RD) 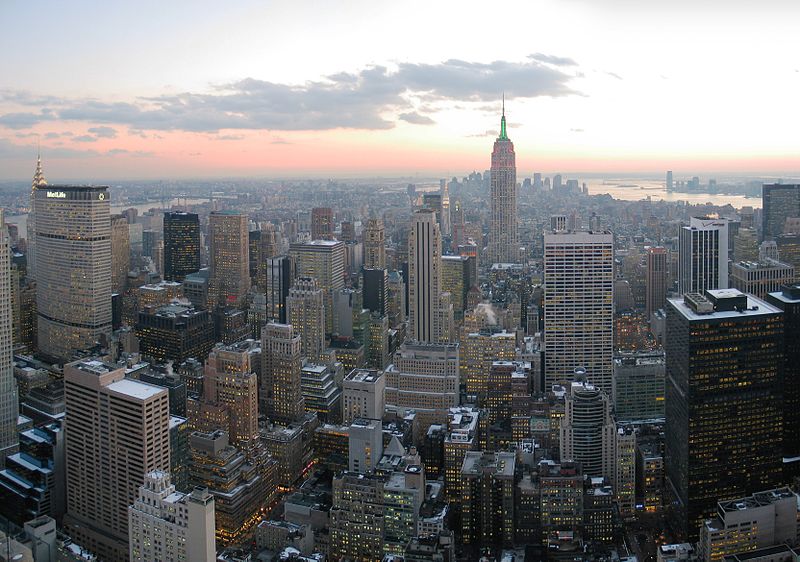 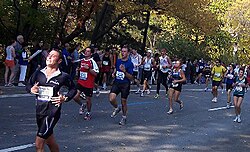 Late in the 2005 marathon, runners on Central Park South near the finish line.

The New York City Marathon is an annual marathon road race run over a 42,195 m (26.2 mile) course through all five boroughs of New York City. It is the largest marathon in the world, with 37,850 finishers in 2006.[1] Along with the Boston Marathon and Chicago Marathon, it is among the pre-eminent long-distance annual running events in the United States and is one of the World Marathon Majors.

The race is organized by NYRR (New York Road Runners) and has been run every year since 1970. In recent years, it has been sponsored by the financial group ING. It is held on the first Sunday of November and attracts professional competitors and amateurs from all over the world. Because of the popularity of the race, participation is limited to 37,000 entrants chosen largely by a lottery system, with preference given to previous participants. Runners who are members of NYRR can gain entry by meeting the qualifications for guaranteed entry or via nomination from an official running club. Officially recognized running clubs are allowed two guaranteed spots for members who did not make it in via lottery. 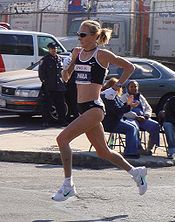 Paula Radcliffe on her way to victory at 2007 NYC Marathon.

The course covers all five boroughs of New York City. It begins on Staten Island near the approach to the Verrazano-Narrows Bridge. The bridge, which normally carries only vehicular traffic, is closed for the event. In the opening minutes of the race, the bridge is filled with runners, creating a dramatic spectacle that is closely associated with the event.

After descending the bridge, course winds through Brooklyn for approximately the next twelve miles. Runners pass through an enormous variety of neighborhoods, including: Bay Ridge, Sunset Park, Bedford-Stuyvesant, Williamsburg, and Greenpoint. At 13.1 miles, runners cross the Pulaski Bridge, marking the halfway point of the race and the entrance into Queens. After about two and a half miles in Queens, runners cross the East River on the dreaded Queensboro Bridge into Manhattan. It is at this point in the race when many runners begin to tire, as the climb up the bridge is considered one of the most difficult points in the marathon.

Finally reaching Manhattan after about 16 miles, the race proceeds north on First Avenue, then crosses briefly into The Bronx via the Willis Avenue Bridge for a mile before returning to Manhattan via the Madison Avenue Bridge. It then proceeds south through Harlem down Fifth Avenue and into Central Park. At the southern end of the park, the race proceeds across Central Park South, where thousands of spectators cheer runners on during the last mile. At Columbus Circle, the race re-enters the park and finishes outside Tavern on the Green. The time limit for this course is 8 1/2 hours from the 10:10 a.m. start.

The first New York City Marathon was held in 1970, organized by New York Road Runners Club president Vince Chiappetta and Fred Lebow, with 127 competitors running several loops around the Park Drive of Central Park. Only about one-hundred spectators watched Gary Muhrcke win the race in 2:31:38. In fact, a total of only 55 runners crossed the finish line. [2] Over the years, the marathon grew larger and larger. In order to accommodate the growing number of participants, co-founder Fred Lebow redrew the course in 1976 to incorporate all five boroughs of New York City. The marathon grew in popularity two years later when Norwegian Grete Waitz broke the women's world record, finishing in 2:32:30. She would go on to win the race an unprecedented nine times.[2] An official wheelchair and handcycle division was introduced in 2000, and starting in 2002, the elite women are given a 35 minute headstart before the elite men and rest of the field. Thirty-seven years after it was started in 1970, the New York City Marathon has now become the largest marathon anywhere in the world. Each year nearly two million cheering spectators line the course from all different neighborhoods of New York. The marathon is broadcast live on NBC to more than 315 million worldwide viewers.[2]

In a normally trivial mistake, runner Rosie Ruiz was accidentally given a finish time of 2:56:29. This qualified her for the 1980 Boston Marathon, where she crossed the finish line with a record time of 2:31:56. It was quickly determined that she had not run the entire course in either race, igniting the most well-known scandal in the history of modern distance running. New York Marathon chief Fred Lebow rescinded Ruiz's time after determining she had not finished the 1979 race, and officials in Boston quickly followed suit.[3]

The top female finisher was Britain's Paula Radcliffe in a time of 2:23:10, beating Kenya's Susan Chepkemei by 4 seconds, the closest finish in the history of this race. The top male was Hendrik Ramaala of South Africa with a time of 2:09:28.

In the closest finish in New York City Marathon history, Paul Tergat of Kenya barely outsprinted Hendrick Ramaala of South Africa in the final meters of the race for a time of 2:09:30, beating Ramaala by one second. In the women's race, Jeļena Prokopčuka of Latvia won in a time of 2:24:41. Tops amongst the Americans were Meb Keflezighi of California (2:09:56) and Jen Rhines of California (2:37:07). South African Ernst Van Dyk took the wheelchair race in 1:31:11.

The top male finisher was Marílson Gomes dos Santos of Brazil in a time of 2:09:58, while Jeļena Prokopčuka of Latvia won the female marathon for the second consecutive time in a time of 2:25:05. Gomes dos Santos becomes the first South American ever to win the race.[4] Stephen Kiogora of Kenya placed second, and Paul Tergat, the 2005 defending champion and former marathon world record holder, placed third.

Seven-time Tour de France winner and former triathlete Lance Armstrong ran in the 2006 race, finishing 868th with a time of 2:59:36.[5] He also ran the same year in the British 10K. Arkansas Governor Mike Huckabee also completed the race in 2006, finishing in 5:33:43, and wearing bib #110, signifying the 110 pounds lost during his weight loss campaign.[6]

Runners before the race at Verrazano-Narrows Bridge in the 2007 marathon.

Professional wheelers heading for the starting line in 2007.

The 2007 New York City Marathon was held on Sunday, November 4th. It was the final race of the 2006-2007 World Marathon Majors, a two-year series of elite marathon racing that also includes the Boston, Chicago, London and Berlin marathons.

However, there were very few elite American marathoners participating in 2007 because they competed the day before at the 2008 USA Men's Olympic Marathon Trials.

Martin Lel from Kenya won the men's race in a time of 2 hours 9 mins and 4 seconds, completing an impressive double of the 2007 London and New York Marathons.

The women's winner was the world Marathon record holder Paula Radcliffe from Great Britain in a time of 2 hrs 23 mins 9 secs, one second faster than her 2004 win.